The two sides discussed on various aspects of bilateral relations. The Deputy Director General gave general overview of the Chongqing Municipal Affairs and its current economic status.  He further discussed about the economic potential and rising of Chongqing as logistic and transportation hub in Sothern and Western China. Appreciating strong partnership that exists between Nepal and Chongqing, he emphasized on cooperation in the area of poverty alleviation, land sea trade corridor vocational training, business development and promotion, tourism, and study opportunities to Nepali students.

The Consul General stating the good and strong bilateral relations between Nepal and the Chongqing emphasized on exchanges of bilateral visits and establishment of cooperation mechanisms between two sides. He mentioned about the requirement to further strengthen the trade and investment relation between two sides by providing more preferential treatment to Nepali products and channeling more investment from Chongqing to Nepal. He said, “There are huge investment opportunities in the field of agro -processing, hydroelectricity, tourism, electric vehicles, infrastructure, and industrial sector in Nepal”. He also highlighted Nepal Government policy of converting landlockedness into landlinkedness and Nepal’s willingness to be linked in the connectivity mechanism undertaken by China. 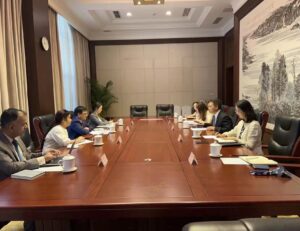 Deputy Director General discussing on 25 years of opening and development of Chongqing, attributed the rapid development of Chongqing to the opening up to the outside world. He stated Chongqing development as major transport and logistic hub and connectivity to outside world through land, sea, and air route has been reason behind its success. He further informed that planned construction of Chengdu Chongqing Economic circle which he anticipates will further help in Chongqing’s economic development. He said Chongqing has good foundation for transportation and logistics channels for development. He informed that railway link to the South Asia has been started since June 2022. He proposed establishment of technical cooperation mechanism for exchange of trade and economic activities at different levels based on cooperation agreements made by respective governments. He appreciated for the opening of Consulate General Office in Chengdu and requirement to effectively utilize this platform to enhance cooperation. 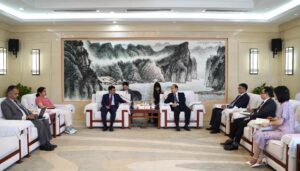 The Consul General appreciating the development achievements made by Chongqing in short duration highlighted need to further strengthening trade and investment relations to truly reflect strong relations that subsist between two sides. He further said that Chongqing development can be true inspiration to other countries on how natural resources can be best mobilize for the development activities. He expected more cooperation from Chongqing side in trade and investment as there is huge trade deficit between the Nepal and China. He also requested facilitation for channeling more investment from Chongqing to Nepal to tap investment opportunities in different sectors.

The two sides agreed to further work in trade facilitation, channeling more investment to Nepal from Chongqing and matching of enterprise for trade and economic cooperation.

On July 12 Officials from the Consulate General visited to New Land-Sea Corridor Operation Co., Ltd (NLSC). Mr. Huo Jia Song, Marketing Director of the Company, and his team greeted and received Consulate Officials. During the visit a site visit to dry port was carried out. Then, a briefing on Chongqing opening and development was conducted at the exhibition center. It was followed with visit and brief meetings with New Land-Sea Corridor Company.

During the meeting Marketing Director, Mr. Huo expressed the company willingness to maintain good working relations with Nepal. He informed that a cargo train heading to Nepal was departed from the dry port in Chongqing on 16 June 2022. It was informed that it takes 10 days for the goods dispatched from the Chongqing dry port to reach Nepal. The length of rail line from Chongqing to Sigatse is around 2000 Km and from there to the border point of Nepal is 500 KM connected through Highways. He stated that goods worth 142 million USD was exported from Chongqing dry port up to July this year. He informed that there is good demand for Nepali products in China and his company can facilitate the import of Nepali products as well. 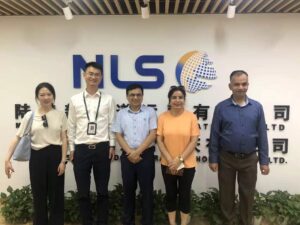