Officials from the Consulate General Nepal led by Consul General Mr. Dinesh Ghimire visited to Guizhou Province from 30 June 2022 to 2 July 2022. During the visit a luncheon meeting was hosted by Guizhou Foreign Affairs office.  Mr. Zhang Hanlin, Secretary of the Leading Party Member’s Group and Director General of Guizhou Foreign Affairs Office led the Guizhou side in the meeting.

The two sides discussed on various issues of bilateral interest. The Director General while, informing the Consulate team about Guizhou province proposed on exploration for possible cooperation in different areas of mutual interest including, Nepal’s participation in the Eco-Forum related to climate change organized by Guizhou province, Big Data Industry, Nepal’s participation in China-ASEAN cultural and educational forum, developing sister city relation between Tongren and Lumbini,  Nepal’s participation in Mountain Tourism and Sports forum and international alcoholic beverage expo and direct flights between Guyang and Bhairahawa by China Southern Airlines.

Meeting with Guizhou Department of Commerce 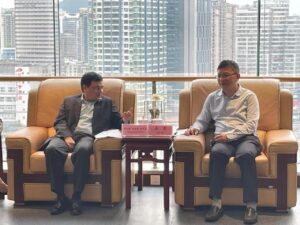 Director General stating similarity between Nepal and Guizhou in different aspects shared the development experience of Guizhou. He highlighted the progress made by Guizhou in industrial, technological, agriculture, and transportation sectors in last 10 years. Expressing Guizhou interest in working with Nepal in trade, investment and tourism, he emphasized on developing cooperation mechanism and sharing experiences at different levels. He also invited Consul General and Consulate team to visit southern part of Guizhou where most of Guizhou’s big enterprises are located.

The Consul General explained the trade and investment opportunities in Nepal especially in hydropower, electrical vehicles, tourism, and agro-based companies. He requested for channeling more investment from the Guizhou Province to Nepal. He emphasized on the air, land, and people to people connectivity between Nepal and China. He said operation of high-speed rail service from Chengdu to Lhasa and up to Nepal’s border, will play important role in connectivity in all these three aspects. He also stated the need to work out in details in the modality of cooperation in different sectors. He requested for Guizhou support in trade facilitation especially in exports of Nepali product to China. He asked to enlarge preferential access to more Nepali products, facilitate transit procedure and help to overcome other constraints like sanitary and quarantine related issues for custom clearance.